As Iranians across borders are probably already familiar with Kiosk, they can now purchase products of this Iranian rock band at their official ALANGOO online shop. Kiosk’s products that are designed by the band itself, currently include T-Shirts for him and her offering designs from the band’s latest album, Call A Cab, which was released this August. We would like to invite you to check back in the near future as the band is preparing other wearable and non-wearable items to be added to their shop for purchase after returning from their European tour, which is happening right now. Kiosk Ts, sponsored by ALANGOO.com, are also available for purchase at the concert venues. Read more and shop here. 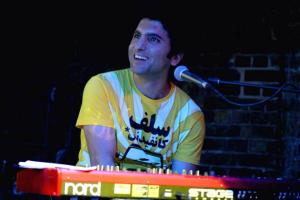 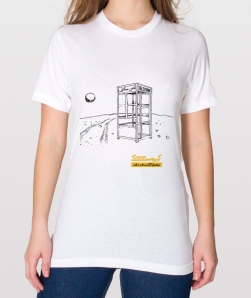 Kiosk T for the album Call A Cab 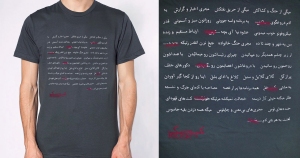 Known as “the pioneers of Iranian rock” (The Berlin Daily Newspaper), Kiosk is a band praised for their sharp and satirical lyrics, as well as their unique blend of musical styles, from rock to gypsy jazz to Iranian folk. The name “Kiosk” stems from the band’s original formation in a Tehran basement in 2003 by its guitarist and lead singer Arash Sobhani. After Kiosk was prevented from performing in public and publishing recordings due to “inappropriate” lyrics, the band members re-grouped outside Iran in 2005. Their first album, Ordinary Man (Adame Mamooli) (2005) was the first underground album from Iran to be officially released on iTunes. They then released five more albums–Amor de la Velocidad (Eshghe Sor’at) (2007), Global Zoo (Baghe Vahshe Jahani) (2008), and Triple Distilled: Live at Yoshi’s (Seh Takhtireh) (2010), Outcome of Negotiations (Natijeye Mozakerat) (2011), Parallel Establishments (Tashkilate Movazi) (2013). Call a Cab (Zang Bezan Ajans) (2014) is Kiosk’s most recent album.

Error: Twitter did not respond. Please wait a few minutes and refresh this page.